All Streaming SIMD Extensions (SSE) instructions using legacy encoding can be translated to Advanced Vector Extensions (AVX) encoding. This is already something that most compilers offer these days when using the correct compilation flag (i.e., -QxAVX with MSVC) to compile all legacy SSE instructions into their AVX counterpart.

Compilers will mostly do that for optimisation reason; however, in our case, this is not necessarily what we are looking for. What is more interesting is to be able to modify the encoding of instructions whilst not modifying their operands and the result of their execution. For this very reason a module for a mutation engine could be developed to translate all legacy SSE instructions to AVX format or from AVX to Legacy SSE format to modify the signature of a piece of code.

Therefore, the objective of this paper is to shortly discuss what SSE and AVX are and how it is possible to switch from one format to another without too many difficulties.

Before SSE there was the MMX facilities. The MMX facilities is the first to implement the concept of Single-Instruction, Multiple Data (SIMD), an instruction set that can perform arithmetic and logical operations on multiple data (i.e., bytes, words, or dwords) – hence the name SIMD. The goal being to reduce memory access operations which take a lot of time to process. This is quite useful for modern media, communication and graphic applications.

However, MMX data registers are aliases for the low 64-bit part of the x87 FP data registers (i.e., ST(0) – ST(7)) on top of limitations or edge cases when a routine uses both instruction sets (e.g., data lose and performance issues). Additionally, MMX facilities does not support operations on floating point values.

This is what the first version of the SSE facilities tries to address via new SIMD and non-SIMD instructions. Also, with it comes completely new 128-bit data registers (i.e., XMM0 – XMM7) which can be used to operate on scalar (single integer/FP for non-SIMD) or packed (for SIMD) operands, such as:

Other features have been implemented such as:

Requesting the feature flags via the CPUID instruction can be used to identify whether a specific SSE instruction set is available.

Simple MASM code that can be used in conjunction with the above table, example for SSE:

Note that for this very paper there I will not go too much into AVX2 and I will not cover AVX-256 and Fused-Multiply-Add (FMA) extensions, which brings even more functionalities. Also, with AVX-256 another encoding is possible with the EVEX prefix (i.e., replacement of VEX).

Before being able to use AVX it is important to check that both the processor and the operating system does support the AVX instruction set and 256- and 128-bit data registers. The following MASM code can be used to check the aforementioned from either User-Mode (UM) or Kernel-Mode (KM):

AVX and the new VEX

As mentioned in the previous section, AVX offers a new way to encode instructions (including legacy SSE) with a compact 2- or 3-byte Vector Extension (VEX) prefix, respectively starting with C5h and C4h bytes. The composition of the 2- and 3-byte VEX prefix can be found in the Intel documentation:

Fields are as follows:

Additionally, for a very small subset of AVX2 instructions, a new Vector SIB (VSIB) byte can be used for memory addressing. This is a special case that will not be discussed there. You can find the list of AVX instructions encoded with a VEX prefix that do uses a VSIB byte later in this paper.

Finally, like all the other prefixes (e.g., Operand Size Override or REX), VEX must be positioned before the primary opcode. Additionally, as shown in the above schema, VEX has bit fields equivalent to the REX prefix, to encode escape opcodes (i.e.,0Fh, 0F38h and 0F3Ah) and SIMD prefixes (i.e., 66h, F2h and F3h). Therefore, if any of them are used with a VEX prefix, an Undefined Instruction (i.e., #UD) exception will be raised.

Translation between Legacy SSE to AVX

Additionally, there is three things to be careful about when translating instructions: 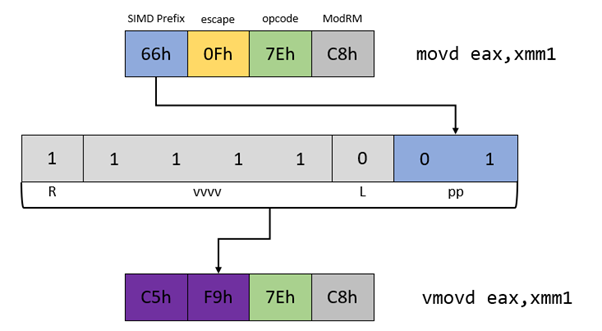 2-byte VEX prefix will be used because no non-destructive additional register is required, the general-purpose data register do not need to be promoted to 64-bit, and, the instruction operates on 128-bit XMM register. Elements to consider:

3-byte VEX prefix will be used because the general-purpose data register DO need to be promoted to 64-bit. Even if non-destructive additional register is required and the instruction operates only on 128-bit XMM register. Elements to consider:

Similar instruction as example two but with a SIB byte and an immediate data value. Also, special case when the AVX instruction does not care about VEX[W] bit field (i.e., WIG). Elements to consider:

In this example there is an instruction using an additional non-destructive operand which will be encoded in the VEX[vvvv] bit field. The complete list of such instruction can be found in one of the tables below. It is important to note that the destination operand need to be encoded twice to prevent unwanted read/write to/from a register or memory address. Elements to consider:

Some AVX instructions does not care about the state of the VEX[W] bit – it will be ignored. It means that when encoding an AVX instructions with such specification, it is possible to set the bit to either 0 or 1 and therefore generate again another encoding. The modification is small but enough to modify a byte and thus break signature in some cases.

First, when looking at all the examples, it is possible to see that when translating from SSE to AVX or from AVX to SSE encoding the ModRM (and potentially SIB) byte, memory displacement and immediate data value are not affected at all. Only the legacy prefixes used as SIMD prefixes, REX prefix, escape opcode and primary opcodes will be modified, making the whole process easier.

It should be noted that mixing both legacy SSE code and AVX is impacting badly the performances of the CPU. AVX modify the upper bits of the YMM data registers while Legacy SSE instructions cannot modify them. As a result, the upper bits can be in a clean, modified and unsaved (also known as dirty), or preserved/Non_INIT state. As a result, when executing an SSE instruction after an AVX instruction, and vis versa, the processor need to save the state of the register (equivalent to a XSAVE instruction).

Therefore, if different code block can be identified, the VZEROUPPER instruction should be executed before and after executing AVX instructions to clean the upper bits of the YMM registers and set them in a clean mode.

To assist in the understanding of this paper, the following resources can be consulted:

The table below list all the instructions that can be directly translated from AVX VEX encoding to legacy SSE and from legacy SSE encoding to AVX VEX.

Appendix B : AVX Only Instructions

The table below lists all the instructions (mostly AVX2) that can only be encoded with a VEX prefix. Table to Markdown

The table below list all the AVX instructions encoded with a VEX prefix that do use a VSIB.

The table below list all the AVX instructions that are using the VEX[vvvv] bit field to define a destination operand.

The table below list all the AVX instructions that are using the VEX[vvvv] bit field to define a second source operand (3rd operand).

The table below list all the AVX instructions that silently ignore the VEX[W] bit when encoded with a 3-byte VEX prefix.