Allowing direct access to named or un-named executive objects to user mode and kernel mode applications would be extremely dangerous as it would interfere with, and render the duty of the executive subsystems obsolete. As a result, this would put the whole system at risk and make the management of executive objects almost impossible.

Additionally, executive objects resides in kernel memory, which means that if user mode applications could directly modify data structure in kernel memory this would also be extremely dangerous and chances of a BSOD would be high. Driver and kernel applications can obviously directly access these data structures, however, most of the objects are undocumented and therefore it is highly recommended not to do so. Instead drivers and kernel applications should (must) use kernel APIs exposed by the different executive subsystems. Finally, they should also increase (i.e. ObfReferenceObject) or decrease (i.e. ObfDereferenceObject) the executive object’s reference count for retention purposes.

For all the aforementioned reasons, and there might be more, Windows uses handles to indirectly interact with executive objects from user mode applications. There are two main advantages of using handles, which are: A layer of abstraction to allow an indirect use of executive object without caring about the actual data structure; and A granular access control based on user and object permissions and object type, checked by the kernel

First, handles are stored per-process basis inside _HANDLE_TABLE structures. The reason behind why there are multiple tables is covered later in this section. The address of this top-level table is stored in the ObjectTable field of the _EPROCESS structure of the process. For this reason, handles are only meaningful for the process in which the handle was created.

Note that drivers and kernel applications have their own “shared” handle tables and the top-level table is the ObpKernelHandleTable table. The address of this table can also be found via the _EPROCESS structure of the System process.

The above diagram provides a visual representation of the memory layout of the structure. The Unlocked field, which is one bit, is used by the kernel to lock or unlock the structure. The RefCnt field of 16 bits size is used as a backward reference count for the handle and starts at 0x7FFF for x64 systems. This means that if the RefCount is equal to 0x789e, there is 761 (0x7FFF - 0x789e) references to the handle. The Attributes field (i.e. audit, inherited and protected) is used to store the handle attributes. The audit handle attribute will dictate whether an event log is raised when the handle is closed. The inherited handle attribute dictates whether the handle will be duplicated into a child process created with the inheritance parameter set to TRUE. The protected attribute dictates whether the handle can be closed. Final part of the first 8 bytes is the ObjectPointerBits field which is used to store the 44 bits of the pointer of the object in memory. Finally, handles are not all providing the same access to an object and the desired access must be provided when requesting an handle. For this reason, the GrantedAccessBits field is used to store the generic access rights that the handle provide. Upon access to the object the generic access rights will be converted into specific access rights based on the object type.

As mentioned hereabove, the handle table is populated whenever an application creates or opens an executive object. For example, if an application creates a new event object the first thing that will be invoked is NtCreateEvent. This function will invoke two functions, first, the ObCreateObjectEx function with ExEventObjectType as object type in order to create an event object and allocate the object in the kernel memory pool, and, second, the ObInsertObject function, which among other things will invoke ObpCreateHandle. In the same fashion, if an application opens an event object, the NtOpenEvent function will be invoked, which in turn will invoke ObOpenObjectByNameEx with the ExEventObjectType as object type. If the object is actually found and that the caller has enough privileges to access the executive object, the ObpCreateHandle will be invoked in order to create a new handle. Regardless if the application creates or opens an executive object, ObpCreateHandle will invoke ExpAllocateHandleTableEntrySlow which is responsible to adding the newly created handle into the appropriate handle table. 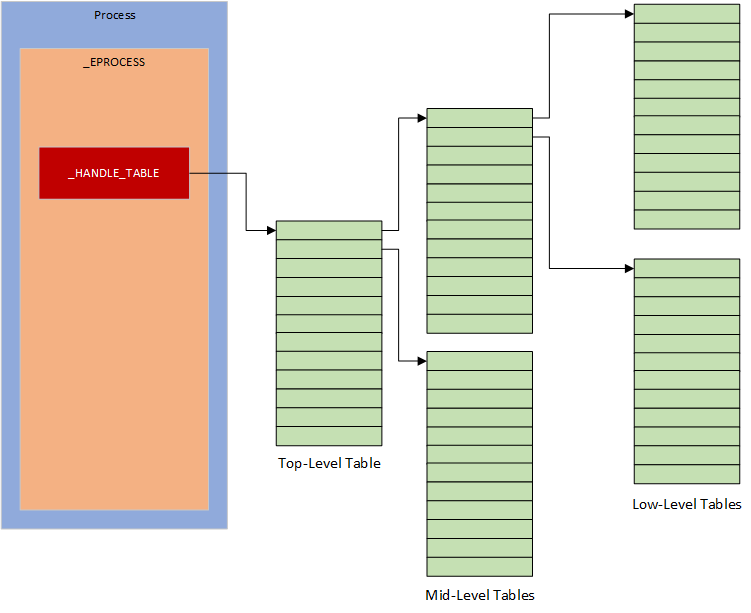 0x01 From Handle to Object

At this stage one question remain: how the Object Manager can return an object when a handle (e.g. 0x000000000000008c) is provided? The answer to this question can be found by reverse engineering the ObReferenceObjectHandleWithTag function has this function, is responsible for returning an object based on an handle. 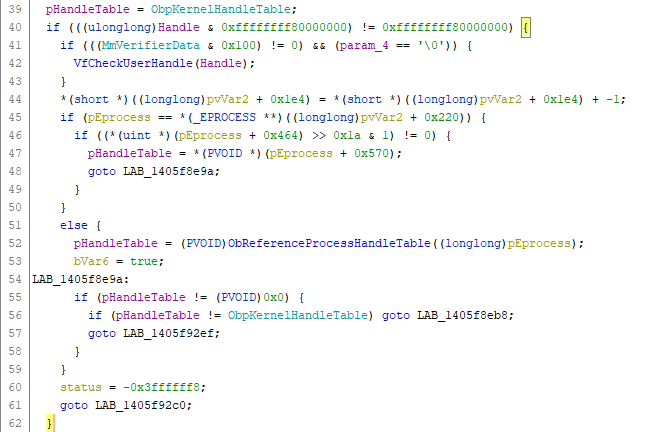 First thing done by the function is to check if the handle provided is a user mode or a kernel mode handle (L40). If this is a user mode handle, the address of the _HANDLE_TABLE of the calling process is retrieved by invoking ObReferenceProcessHandleTable (L52) with a pointer to the caller _EPROCESS structure has single parameter. If this is a kernel mode handle, the operation is simpler has the address of the _HANDLE_TABLE is located stored in the ObpKernelHandleTable variable.

If a kernel mode handle is provided, the value is modified with a bitwise AND operation (L121) in order to have a “normal” handle. The ExpLookupHandleTableEntry function is then invoked in order to get the _HANDLE_TABLE_ENTRY structure corresponding to the handle provided via the _HANDLE_TABLE of the process.

The address of the _OBJECT_HEADER structure of the object is then calculated (L168 or L157) with two bitwise operations against the first 8 bytes of the _HANDLE_TABLE_ENTRY structure, which as mentioned earlier represents the location of the object in the kernel memory pool.

Before returning the object, there are two other checks done by the function. First one being to compare the type of the object returned with the handle provided with the object type expected. For more information about how to get the type of an object based on the object header please refer to the Object Types section.

Lastly, the function checks if the caller has enough privileges to request the desired access with the ObpAuditObjectAccess function. If so, the object is returned by reference (L265), otherwise, the STATUS_ACCESS_DENIED (0xC0000022) status code is returned.

Based on all the above, if a breakpoint is set to the ExpLookupHandleTableEntry function, it is possible to locate the object in memory with _HANDLE_TABLE_ENTRY structure returned (stored inside RAX register).